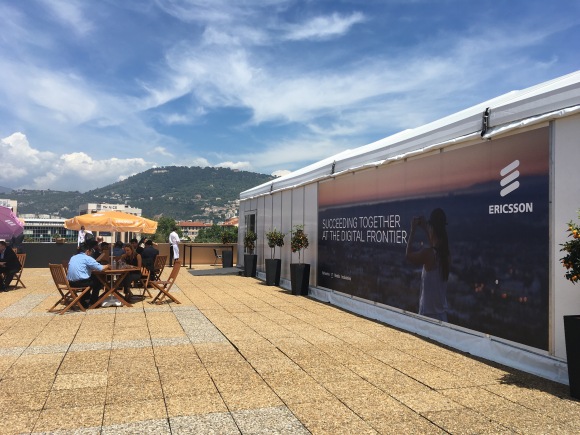 I’ve been spending the last two weeks hanging out with telco and wifi people. First at Atmosphere 2017, a yearly conference organised by Aruba who offer corporate wifi networks to large enterprise clients. Last week I was visiting Ericsson IT at TMFLive, an event for the telco industry in Nice.

I’m a product designer first and foremost and it’s been eye opening to see what people think IOT means in an infrastructure context. For them, broadly, it’s all data and usage. There is no distinction between a kettle and a lamp connected to the internet, it’s all data they have to manage, offer dashboards for, help their customers (large scale manufacturers of those ‘things’ to manage at scale, to help them identify it on the network and control if something goes wrong).

While speaking to Any Puhakainen a security expert at Ericsson, we got to the crux of what makes #iot not just a ‘thing’ and why I’m always uncomfortable with people writing off #iot as just ‘data’.

She showed me some of Ericsson’s dashboard (see below) for device security management and with some nicely laid out tools to figure out what happened to a particular device and what the impact of a breach might be. This all depended ultimately on the device being identifiable by Ericsson (this camera, this model, this year of make, this capability) and its ‘expected’ behaviour to be something they are able to get ‘out of the box’.

This implies that a manufacturer would disclose to the network what the ‘normal’ behaviour of use of their device might be. This is interesting as it then depends on the device. For a kettle, is it supposed to be turned on every hour? Or is 10 times an hour too much? Depends on the context, office or home. Who is supposed to tell the manufacturer this so that they are able to disclose this to the network or anyone else? Someone, somewhere along the chain needs to own this to make security possible at all presumably. If it’s the end user/customer/human that makes them the first line of support for their own usage which seems a little wonky when you think of how much companies spend on their IT and security teams. I know we’re in a DIY economy, but when it’s a heart rate monitor someone has to man up and say they’ll be responsible for the performance of the device and its data. So who owns this problem?

I had a further conversation with Karan Budhiraja at Ericsson, who is working on network slicing tools. We had a good conversation on SLAs and information management across telco partners. I’ve built the Good Night Lamp with 2G and an MVNO as a partner. It got me thinking about the contractual challenges of offering a connected heart rate monitor, which relies on a GSM connection. What if you buy a product like that in the UK, take the Eurostar and the connectivity drops in the tunnel and you have a heart failure. By the time you reemmerge out the other end, will the UK emergency services be called? The French one? How would they know who you are? Will it simply be down to whoever is a doctor in the train or can you already know that?

Lots of challenges and lots of opportunities, especially when it comes to billing a customer for all this as a telco. I chatted with Mireille Harvey at Ericsson who shared some thoughts on how dynamic billing is a new challenge. Do you charge per sensor reading, per insight or per transaction. We discussed how Ericsson’s foray into an agricultural showcase showed them some of the challenges of dealing with that sector, looking for cities to provide tools for groups of farming cooperatives instead of targeting directly cash strapped farmers.

If you’re interested in more, there’s now an interview of Ericsson’s CTO Ulf Edwaldsson that was captured during the event.

All in all, lots of food for thought for me and our upcoming #iot certification event on June 16th at the London Zoo!

One reply on “Ericsson’s #iot work at TMFLive”