I was invited to attend CES by the nice people at Here so I thought I’d write a little blogpost about what they are up to and what I thought.

First a little bit about them. here is a mapping company which is mostly owned by German automotive companies (Audi, BMW, Daimler) and recently sold a 10% stake to Navinfo, Tencent and GIC Private Limited and 15% to Intel. So it’s a company in transition in terms of its interest in the mapping space. It is clearly starting to invest in finding out exactly how maps and #iot can interact.

We (including Sayan who co-founded the Bangalore #iot meetup) were shown around 3-4 exhibits in their lovely 2 storey exhibit space right outside the Las Vegas Convention halls (so less crowded thank god).

The first exhibit reminded me of a Microsoft Surface or Reachable demo as it was using little units on top of a table-sized map to play with the different ‘city KPIs’ (which strangely included population level) and see how it may affect urban design decisions, upgrades in the system and general transportation decisions for city stakeholders. The data fuelling the maps was real time data that had been captured the year before and it was fun to see the extrapolated movements of the city. These changes were based on a report with projections from the city of Berlin. I think as a visualisation tool this is pretty nifty especially for city stakeholders, I can imagine them wanting to order one of these tables, but as a malleable piece of data gathering I suspect unless a city has a CTO, they won’t know how to feed this map with the right data. Population for eg. isn’t strictly predictable and may point to actions that have nothing to do with transport. The city may need to think about alternative transportation needs as older citizens lose their driving licenses in their 70s and hospitals start to engage with various ways of delivering services at home. Would the map highlight or help map this need? I’m not sure. Perhaps there is a demo version Here will invest in, some kind of SimCity way of looking at transportation as part of a broader ecosystem within the city. Showing the difference between bike, bus, delivery van and waste collection would be terrific and right now there’s no way to ‘feed’ that in unless the data is coming from a partner. That said Here is developing a developer platform which will be launched later today, so worth seeing who starts to play with what they have built.

The second showcase we were shown was the use of sensors inside cars to use computer vision and help map in real time parking lot availabilities for other drivers and also changes in the street signage and roadworks. We were shown the driver’s view as well as the ‘camera’s view’. 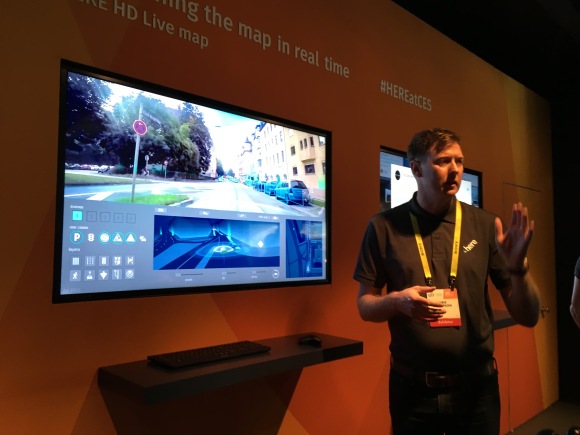 I’ve always been interested in construction sites as having an impact on roads, especially as a pedestrian who thankfully doesn’t have a disability. But if you’re in a wheelchair or blind and a road is suddenly obstructed overnight by new scaffolding how are you supposed to know unless the structure itself speaks to the ‘city’ and maps services like Here. Could a set of GPS units be helpful, when placed at the extremities of building scaffolding, in helping plan the anticipated change in travel for all citizens?

Lastly we were shown some Augmented Reality display which made me slightly queasy so I preferred meandering to the rest of the booth and looking at their future indoor mapping applications. I’m very interested in the edges of automation in a connected workplace so it was interesting to see that’s something Here are looking at.

There’s a lot there, so it’s worth rummaging around their site and having a look. They’ve got lots of offices around the world too and with the developer tools they’ve built and upcoming features, I’m sure they’ll want to talk to people from the London IOT Community. I’ll see how we can get them to come over and maybe run a workshop!

One reply on “HereatCES: on the road to smart cities”